With a confusing patchwork of state data privacy laws becoming a growing headache for businesses, pressure has been rising for a national privacy law that would pre-empt the states and create a uniform national framework.

An analysis by ITIF found that the costs of these state laws are staggering and justify federal pre-emption: 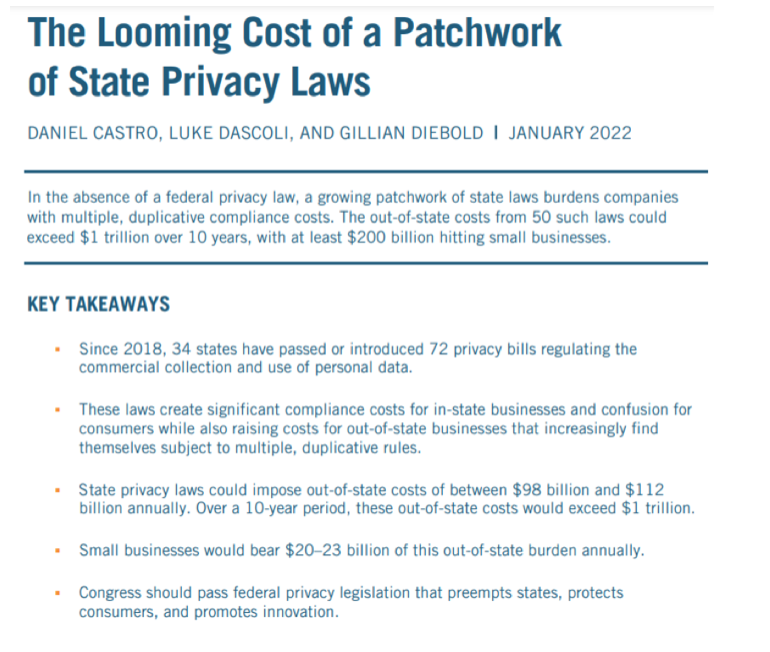 Unfortunately, the proposed American Data Privacy and Protection Act fails to fully accomplish that basic task, keeping several of the costliest and most litigious state requirements in place.  Specifically, the bill grandfathers California and Illinois provisions that are major sources of litigation.

Worse, by creating a private cause of action in addition to FTC enforcement, the bill would unleash a torrent of federal litigation that would enrich trial lawyers and undermine business confidence with no clear benefit to consumers.  The inclusion of compensatory damages creates potentially open-ended liability for companies and a “jackpot justice” incentive for trial lawyers.

As Americans for Tax Reform notes: “the bill contains a private right of action that trial lawyers will weaponize to fleece companies for millions of dollars. A trial lawyer could seek a remedy for subjective, ‘compensatory’ damages like emotional distress, inconvenience, loss of opportunity, damaged relationships, and other hard to prove claims. This provision incentivizes trial lawyers to launch frivolous and arbitrary suits against companies with the hope that a company will settle instead of spending millions of dollars to defend against specious claims in court.”

A national privacy bill to pre-empt the states and create a uniform approach is badly needed, but Republicans should insist on a version not compromised by Democratic loyalties to the trial lawyer lobby.