Accenture's Emergency No-Bid Healthcare.gov Contract Is 6mo+ Behind Schedule and $30M Above Cost

When the Obama administration bypassed the usual competitive bidding rules to issue an emergency $91 million, no-bid contract to Accenture to buld the missing back-end payment system for Healthcare.gov, the justification was that the entire system would collapse without this functionality complete by mid-March. 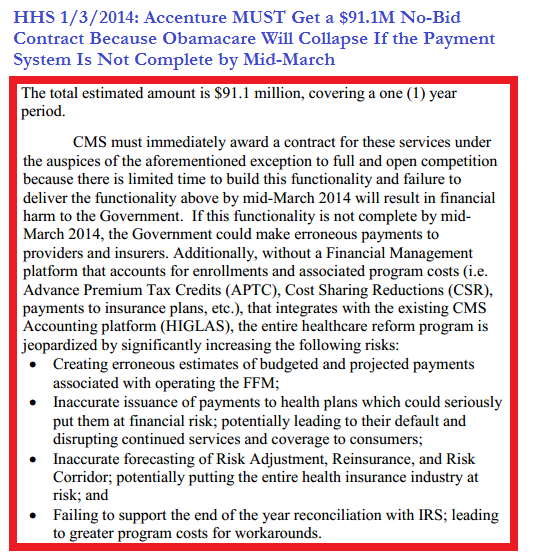 But was the payment system completed? Of course not.  In fact, HHS has now published a timeline for payments using the manual, estimated "Interim Payment Process" through at least the end of September -- more than six months behind the deadline that so urgently required a no-bid contract:

And here's the really wonderful news on Accenture's no-bid contract: not only is it running at least six months late, but the cost has also ballooned to at least $121 million, a 33 percent cost overrun of $30 million.  And it will almost certainly continue to climb.

But hey, what's another $121 million dollars from federal taxpayers when you just flushed over a billion on just five state Obamacare websites that barely work at all?