Democratic U.S. Senator John Walsh brazenly plagiarized nearly the entire thesis that got him an unearned master’s degree.  When this fact came to light, he withdrew from his campaign for reelection (although he remains in the Senate).  Good.  But Montana Democrats nominated in his stead State Rep. Amanda Curtis, a member of the radical, revolutionary socialist group Industrial Workers of the World (IWW).

Rep. Curtis was nominated for the United States Senate by the Montana Democratic Party on August 16, 2014.  Less than two weeks earlier, on August 4, she tagged herself in this photograph featuring IWW banners and identifying Curtis as an FW, or “Fellow Worker,” the term used in IWW for group members:

Her husband Kevin Curtis is the Butte delegate to the IWW’s statewide group, known as Two Rivers General Membership Branch.  The telephone number listed for Mr. Curtis in his role with IWW is the same number Rep. Curtis lists as her primary contact for legislative constituents.

The mission statement for the Two Rivers General Membership Branch of IWW (of which Kevin Curtis is a leader and Amanda Curtis is a member) is:

The Two Rivers General Membership Branch consists of members of the Industrial Workers of the World, a.k.a. Wobblies, from across the state of Montana (Missoula, Hamilton, Butte, and Billings). We are working to organize the people of Montana into the One Big Union to end wage slavery and eventually end the capitalist system.

That mission statement closely echoes the preamble to the constitution of the parent organization:

Instead of the conservative motto, "A fair day's wage for a fair day's work," we must inscribe on our banner the revolutionary watchword, "Abolition of the wage system."

It is the historic mission of the working class to do away with capitalism. The army of production must be organized, not only for everyday struggle with capitalists, but also to carry on production when capitalism shall have been overthrown. By organizing industrially we are forming the structure of the new society within the shell of the old.

The preamble is printed next to a sign-up form in the same issue of the IWW newspaper Industrial Worker as an article authored by Rep. Curtis.  In the article Rep. Curtis describes the dedication of the memorial to Frank Little at which she is pictured above.  She notes “the epitaph which reads ‘Slain by the capitalist interest for organizing and inspiring his fellow men.’”

On August 7, 2014, Rep. Curtis changed her Facebook profile photograph to a picture of former Communist Party USA chair Elizabeth Gurley Flynn, who received a state funeral from the Soviet Union in 1964. 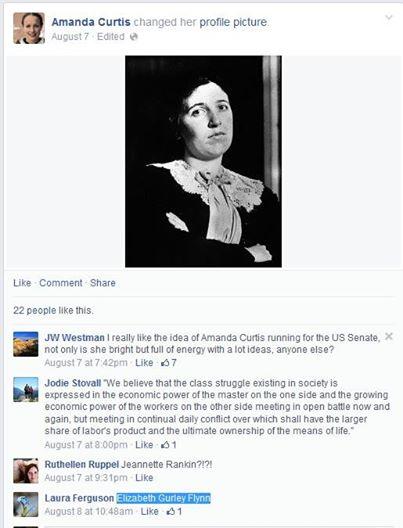 One post of Mr. Curtis’s that Rep. Curtis shared on July 31 suggests that, in the event she and her allies cannot accomplish their objectives through electoral victories, they will resort to “sterner means”:

Despite her known extremist ideas and associations, Rep. Curtis’s candidacy for the U.S. Senate has been enthusiastically embraced by national Democrats, including Harry Reid, who said Democrats are “doing really well in Montana,” Kirsten Gillibrand, who has already sent a fundraising email for Curtis, and Jim Dean, whose group Democracy for America endorsed Curtis and called her a “progressive hero.”

Apparently, in 2014 plagiarism is beyond the pale in the Democratic Party, but revolutionary socialism is perfectly acceptable.

It should be noted that proponents of the ideology’s most virulent expression, Communism, killed approximately 100 million people last century.

UPDATE. Curtis was asked about her IWW ties and even whether the ideology is communism.  She dodged both questions. Listen: