Lower Unemployment, No Thanks to Democrats

President Obama and his Democratic allies are claiming credit for the latest in a string of positive jobs reports, but if they had their way it wouldn’t have happened.  Why?  According to empirical research by the Federal Reserve Bank of New York: “most of the persistent increase in unemployment during the Great Recession can be accounted for by the unprecedented extensions of unemployment benefit eligibility.”

Those benefits finally ended at the end of 2013, triggering a sharp rise in hiring – but Democrats have pushed to reinstate them all year and made it a centerpiece of their election campaigns.

The New York Fed report includes an extensive literature review of the studies showing unemployment benefits reduce labor supply by an imposing an implicit tax on work and an incentive for people to choose to collect benefits rather than working.  Notably, it finds that this effect, while real, is relatively small.

The much bigger effect comes from the impact of extended unemployment benefits on labor demand, the number of job vacancies created by employers.

“The logic of the model is simple,” the authors explain. “Everything else equal, extending unemployment benefits exerts an upward pressure on the equilibrium wage. This lowers the profits employers receive from filled jobs, leading to a decline in vacancy creation.”

The extraordinary extended unemployment benefits in recent years created a great natural experiment to test this theory, because states changed their benefits at different times and for different durations of unemployment.

The researchers compared border counties in states with differing policies to measure the impact of these policy changes on employment.   They found: “changes in unemployment benefits have large and statistically significant short-run effect on unemployment.” 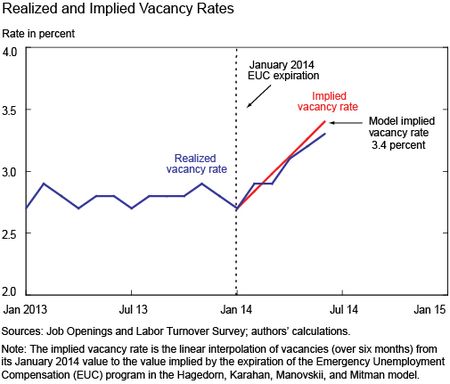 Specifically, they found that the average extended unemployment benefits duration of 82.5 weeks for four years had the impact of raising the unemployment rate from 5 percent to 8.6 percent.

Even considering the supposed stimulative effect of unemployment benefit dollars being spent, the empirical research is clear: “border counties with longer benefit durations have much higher unemployment, despite the potential beneficial effects of spending.”

The New York Fed report is consistent with the experience of the state that was first to end extended benefits: North Carolina.

Under the leadership of Governor Pat McCrory, they ended extended unemployment benefits six months earlier than the rest of the country and – despite dire predictions from liberal activists – the results were positive with the unemployment rate dropping from 8.3 percent in June, the last month of extended benefits, to 6.7 percent in January when the rest of the country followed North Carolina’s lead.  The new research from the New York Fed confirms this improvement was likely caused in large part by the return to standard unemployment benefits.

Good intentions are not enough in public policy.  It might seem kind and compassionate to spend billions of taxpayer dollars on “emergency” unemployment benefits forever, but the effect is to keep millions of people unemployed.  Results matter.

President Obama – in a Thursday speech claiming undeserved credit for the improvement in employment – said: “when push came to shove this year, and Republicans in Congress actually had to take a stand on… extending insurance for the unemployed -- the answer was ‘no.’”

He was actually attacking Republicans for the very policy change that caused the improvement in the jobs picture.

The president also said: “Now, I am not on the ballot this fall.  Michelle is pretty happy about that. But make no mistake:  These policies are on the ballot -- every single one of them.”

That part he got right.  And a vote for Democrats is a vote for steeply higher unemployment rates – at taxpayer expense.