In testimony today, Gary Cohen, deputy administrator at CMS (the agency that runs Healthcare.gov) was asked how many previously uninsured people had signed up for Obamacare.  He gave this astonishing response:

CMS' Cohen, asked how many uninsured signing up for ACA: “That's not a data point we are really collecting in any sort of systematic way”

Fortunately, shortly after the administration pleaded ignorance, the Washington Post published this report:

A pair of surveys released on Thursday suggest that just one in 10 uninsured people who qualify for private health plans through the new marketplace have signed up for one — and that about half of uninsured adults has looked for information on the online exchanges or plans to look.

And while only 10 percent of the insured have signed up for a plan, there's even more devastating news in the McKinsey survey for the administration and its apologists who tout the claim of four million shipping carts as if it's an actual enrollment figure.  While their report that about 77 percent of "persons who selected a plan" actually paid a premium is in line with estimates reported in the New York Times and elsewhere, McKinsey gives us a breakdown by prior insurnace status, finding that while only 14 percent of the previously insured failed to pay their premiums, non-payment among the uninsured nearly hald at 47 percent: 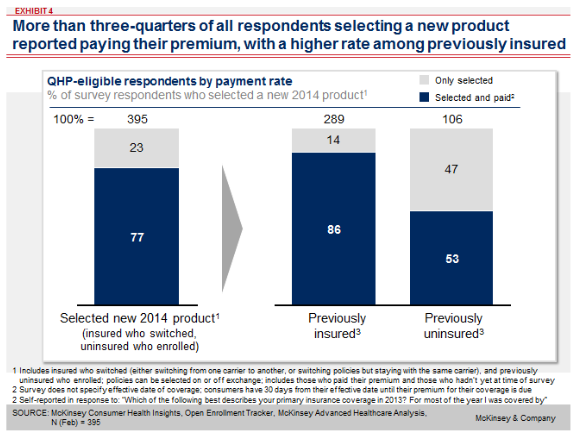 Why are only 10 percent of the uninsured signing up - and half of them failing to pay?  While people citing technical problems dropped from 40 percent in December to 27 percent in February, affordability concerns are at 50 percent, up from 42 percent in December.  People can see the prices now that the website works, and they don't like them.

And it gets even worse.  Bob Laszewski reports that another two to five percent of enrollees who paid their January premiums failed to pay in February.  That group is also likely skewed toward the previously uninsured.

For this we spent trillions of taxpayer dollars and turned the whole health care system upside-down?