Washington, D.C.—American Commitment Foundation is today filing an amicus brief with the Supreme Court of the United States against the Biden Administration’s controversial COVID vaccine mandates.

Partnering with epidemiologists Jay Bhattacharya of Stanford University and Andrew Bostom of Brown University, the American Commitment Foundation amicus brief informs the court that the Omicron variant is now dominant, that Omicron is not a grave danger, and that mandated vaccines are not effective at reducing Omicron infection.

“The Biden Administration has overstepped its authority and made a mockery of science.  We urge the Supreme Court to invalidate these vaccine mandates,” said Phil Kerpen, president of American Commitment Foundation.  “The Administration is now mandating a vaccine designed for a two-year old virus that no longer exists, when the virus that’s everywhere is dramatically less dangerous—on par with a typical respiratory virus—and the mandated vaccines are ineffective at stopping infections from sweeping the country.  Without even considering the mandate’s many constitutional and statutory defects, it should be easy for the Supreme Court to stay it just based on the evolving scientific facts.”

The amicus brief can be viewed online at:

There's no excuse for using COVID to shut down schools again

By Stephen Moore and Phil Kerpen

President Joe Biden got it right when he said on Tuesday, "We can keep our K-through-12 schools open, and that’s exactly what we should be doing."

But that didn't prevent the Chicago Teachers Union from illegally going on strike.  Pay no attention to the $1.8 billion of federal tax dollars Chicago got in last year's shakedown.

Worst of all is New Jersey, where over 33 percent of all students in the state are locked out of school this week.  They are disproportionately in economically disadvantaged districts.  And New York’s UFT union is also threatening – ironically, a sick out.

Are our educators ineducable? They appear to have learned nothing from the catastrophic school lockdowns in 2020.

The effect was a full year of lost schooling for millions of school-age children, and the most damage was done to the lowest income and minority students, for whom online schooling was ineffective and alternative education opportunities were scarce.

The effect on COVID spread?  Worse than nothing – closing schools has been shown in study after study to actually increase spread, because students and teachers not in school are in the community, where infections spread more easily.

Another study from Ohio State found that "districts with fully remote instruction experienced test scores declines up to three times greater than districts that had in-person instruction for the majority of the school year."

According to the CDC, emergency department visits for suicide attempts were up 31 percent last year among teenagers.   In Maryland, where closures were a state with the most widespread and prolonged, 1 in 5 teens seriously considered suicide in the past year, 27 percent used more tobacco, 37 percent used more illegal drugs, and 29 percent drank more alcohol.

Educational harms themselves also have long-term health consequences.  A study in the Journal of the American Medical Association found that the loss of educational attainment in just the first two months of school closures would reduce life expectancy by a staggering 13.8 million years of life.

The loss of future income is staggering.  The original round of global school closures is estimated by the World Bank to result in $17 trillion in lost lifetime earnings for students, a 14 percent hit to GDP.

No study anywhere has shown school closures provide a benefit anywhere near justifying the harms.  In fact, study after study shows they fail even at reducing COVID transmission, and more likely increase it.

A Journal of Global Health systematic review of 90 studies found "opening educational establishments may not predispose children and...

Jonathan Decker on December 1, 2021 | End Regulatory Tyranny
Today, the Senate Commerce Committee will hold a hearing on Gigi Sohn for a 5-year term on the Federal Communications Commission.  Ms. Sohn is a Ford Foundation alum, George Soros Open Society Foundation Fellow, and far-left activist.  American Commitment strongly opposed this nomination and urges all Senate Republicans and moderate Democrats to reject this dangerous nominee.
Sohn’s extreme views and unhinged temperament make her unfit to serve on the FCC or anywhere in government. Sohn has labeled Fox News “state-sponsored propaganda,” called it “dangerous to our democracy,” and said it is “destroying democracy & electing autocrats.” She has expressed interest in using the FCC’s power to silence media outlets she disagrees with.

Sohn has stated that Senate Republicans are a threat to our Republic and allowed their ideology to overtake their duty to serve their constituents. She believes Republicans can only win elections by suppressing votes. 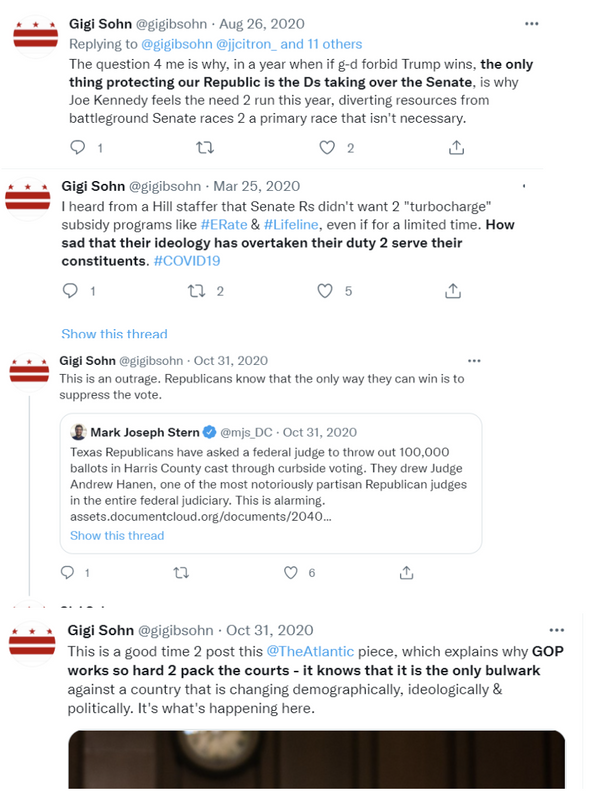 Sohn’s opposition to basic copyright and IP protections led her to joining the board of an organization (Locast) that stole the signals of broadcasters and retransmitted them for profit without consent.  A district court just entered a $32 million judgment against her organization for this conduct, which violated the U.S. Copyright Act.
Senator Thom Tillis just wrote the White House demanding that they withdraw her nomination for her extreme IP positions alone.
While the FCC has a history of bipartisan cooperation, it’s hard to envision Sohn ever working across the aisle given that she believes Senators that disagree with her extreme views are “bought and paid for.”
Sohn has hardened...

The latest iteration of Build Back Better – the president's multi-trillion-dollar tax-and-spending binge that has been stalled in Congress all year – purports to reduce the cost of prescription drugs via negotiation.  But Medicare prescription drug plans already negotiate prices aggressively; as Obama's CBO director Doug Elmendorf explained back in 2009: "additional authority to negotiate for lower drug prices would have little, if any, effect on prices for the same reason that my predecessors have explained, which is that private drug plans are already negotiating drug prices."

So how can Democrats extract the $250 billion they are counting on draining from Medicare drug spending to fund the creation of new, unrelated welfare programs in Build Back Better?  They don't negotiate – they impose price controls.  Starting with 10 drugs but sure to expand over time from there, the secretary of HHS would "negotiate" by setting the "maximum fair price" – and if the manufacturer disagrees, they are subject to a tax on total sales of that product that starts at 65 percent, then jumps to 75 percent after 90 days, 85 percent after 180 days, and finally a shockingly confiscatory 95% after 270 days.  A price set by government under that threat is a price control, not a negotiation.

Price controls always lead to shortages, and draining $250 billion from Medicare – sure to rise as the price control scheme expands – will mean shortages of life-saving medicines for seniors.  An analysis of an earlier version of the Democratic price control plan by University of Chicago researchers found that it would lead to between 167 and 324 fewer new drugs being developed over the next two decades, with R&D spending plunging about $1 to $2 trillion.

There is no free lunch.  If politicians slam the breaks on Medicare prescription drug spending, seniors will inevitably have less access to innovative drugs.

We might expect major U.S. corporations to understand the basic reality that markets allocate resources better than politicians, and that price controls do more harm than good.  Unfortunately, when it comes to health care policy, the HR department seems to call the advocacy shots even when the C suite would know better.

When the latest Democratic draft was announced, Bloomberg ran an article with the surprising headline "Drug Price Deal Hailed by Employers as Key Step to Slash Costs."

The American Benefits Council, which represents hundreds of large employers, said they were "very supportive of the provisions."

"The negotiations provision will be a foot in the door," the article quoted the ERISA Industry Committee saying favorably, that would lead to the extension of drug price controls to private plans outside of Medicare.

But there is no reason to think that, once opened, the price control door would be limited to prescription drugs.  With burgeoning inflation lifting the costs of everything, it would be easy for politicians basking in their "success" at setting drug prices to move on to broader price-controls in a 1970s redux.

Over the past two decades, Congress has repeatedly softened the blow of the federal estate tax by increasing the exemption amount – from $600,000 in 2000 to just under $12 million now.  It still hits the largest, most successful family businesses hard, and most people think taxing death is wrong regardless of the exemption level.  Nonetheless, President Trump called the higher exemption "virtual repeal," because for most Americans the tax is no longer a direct concern.

President Biden has other ideas; at the heart of his budget is a new, second “double” death tax with an effective rate of 43.4% on the appreciated value of assets held by an owner following their death. This new double death tax is in addition to, not instead of, the estate tax. And with only a proposed $1 million exemption, it would hit all income levels as vast numbers of small businesses, family enterprises and farms may be hold assets (land, buildings, machinery, etc.), but are often cash poor or even in debt.

A new study conducted for the Committee to Unleash Prosperity by the economic modeling firm REMI finds the economic consequences of this double death tax would be devastating.  The study found -- with very conventional assumptions -- that the Biden proposal to impose capital gains tax at death and hike the rate to over 40% would destroy well over 900,000 jobs and cost the average household about $10,000 in lost income.

That's probably part of why its former longtime Democratic senator and former Senate Finance Committee Chairman Max Baucus (D-MT) recently came out swinging against the tax, writing the tax "would force family businesses and ranchers to liquidate when an owner dies and to lay off employees while bringing in little revenue for Uncle Sam.  Lawmakers should know this is a mistake… Proponents try to temper criticism by suggesting carve-outs, but we’ve learned from experience that they are ineffective."

And former House Agriculture Chairman Collin Peterson (D-MN) went even further calling it “the worst idea that has been proposed in terms of its impact on agriculture in my lifetime.”

Meanwhile, Main Street USA remains utterly confused as to why the Biden Administration and Congress seem so intent on now hammering family businesses, those most challenged as they try and emerge from the COVID-19 lockdowns, with massive, even crippling, new asset transfer taxes. They are also putting the livelihoods of those that work for or do business with family businesses, and their communities, in jeopardy.

Sadly, all this has very little to do with tax policy.  It is about finding “pay fors,” or new government revenues, to cover the cost of Biden's massive new spending programs.

The scorekeepers at the Congress’s Joint...