Energy prices are up 32 percent in the past year, causing pain at the pump, paying monthly utility bills, and buying everything that's grown, shipped, or manufactured.  And yet, staring at this painful reality, many of America's largest corporations are elevating green wokeness over economic and business logic by calling – in the midst of record high energy prices – for new taxes on energy.

The major oil and gas producers themselves have been shopping a "tax our customers, please" slide deck around town in Washington, DC.  According to the Wall Street Journal, "The nation’s biggest oil industry trade group has drafted a proposal urging Congress to adopt a carbon tax, which would put a surcharge on gasoline and other fossil fuels to discourage greenhouse-gas emissions. The draft proposal was approved by the American Petroleum Institute’s climate committee last month."

The assumption here is that becoming tax collectors for Washington politicians will somehow cause them to loosen their regulatory grip.  There is a certain perverse logic here, perhaps modeled on the tobacco industry, which secured its long-term future by becoming one of the major revenue sources for state governments.  But it unmistakably means higher costs for customers and more economic pain.

It's not just the oil and gas industry.  The Business Roundtable, a group of corporate CEOs from across ever sector of the economy, published a "roadmap for U.S. energy policy," ostensibly to lower prices.  But plank number six of their plan is to "establish a price on carbon," that is, impose an energy tax on fossil fuels.  It is absolutely insane to call for higher taxes on energy in a plan to lower energy prices.

"At a time when skyrocketing inflation is hammering American families, it is shocking and tone-deaf that The Business Roundtable’s latest energy policy proposal calls for a new energy tax that would increase energy costs… We strongly oppose the BRT’s proposed energy tax that will hit lower-income families, small businesses, and those on fixed incomes the hardest while doing nothing to confront China, the world’s largest emitter of carbon… Advocating for an energy tax while soliciting massive government handouts for special interests is destructive, ineffective, and unaffordable."

That is a near-unanimous sentiment among House Republicans, but unfortunately Senate Republicans may be more susceptible to industry-lobbying for higher energy taxes.  Several are in a bipartisan working group that appears to coalescing around on a plan to impose carbon taxes only on imports, seizing on the Trump-era GOP's friendliness toward tariffs.

Bloomberg reported the plan "would place tariffs on fossil fuels and products such as cement and steel to prod countries that are moving too slowly to cut their greenhouse gas emissions."

Such a tax would directly raise costs for Americans on top of the budget-busting prices they are already experiencing – and it would likely spur other countries to retaliate, eventually leading to global...

The Committee To Unleash Prosperity (CUP) has released the most comprehensive analysis to date on how states handled the COVID-19 crisis. These results have also been published by the National Bureau of Economic Research.

The Report Card on the States measures and compares state performance on three metrics: the economy, education, and mortality from the virus. It answers the question: how did states do in balancing the health of their citizens, allowing their economies to remain operational and keeping job losses low, and keeping their schools open so that school-aged children did not suffer long term educational setbacks. 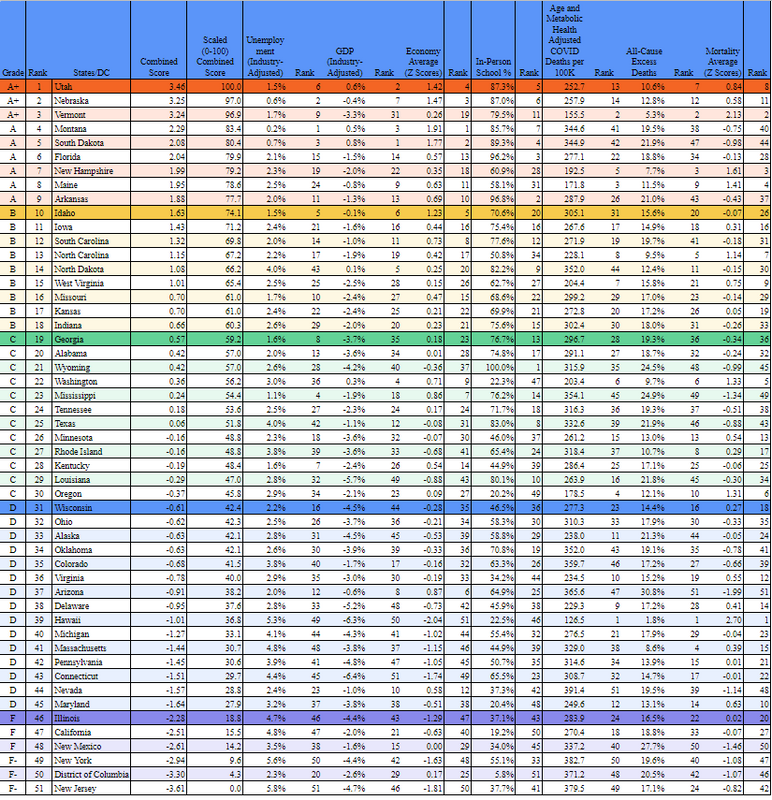 Jonathan Decker on April 4, 2022 | End Regulatory Tyranny
FOR IMMEDIATE RELEASE
March 31, 2022
Washington, D.C.—A significant new analysis by American Commitment president Phil Kerpen, along with Emily Burns and Josh Stevenson, definitively concludes that masks failed to keep kids in school.  In fact, contrary to the claims of public health officials, masked school districts experienced both higher rates of Covid infection and disruption of learning.
“This is not a model or a theory.  This is what actually happened.  In January and February of this year, mask-mandated school districts had far more school closures than mask-optional.  Period,” Kerpen said.  “The idea that masking would keep kids in school is now empirically disproven.”
The new analysis finds:
“One of the reasons we were told masks were essential for school kids this year was that masks would reduce the likelihood of school closures, by reducing disease incidence. Unfortunately, like so much the CDC has promised, the opposite turns out to be true….Children in masked districts experienced, on average, 4-times the number of disrupted learning days as those in mask-optional districts (Figure 1). The same districts also had 2.5 times higher case rates during the same period as we demonstrated in analysis published on March 9th, 2022.”
The report continues:
“This result is as important as it was expected. The CDC promised that whatever potential (and willfully ignored) harms might come to children from two full years of forced masking, they must be risked, due to the added safety and schooling...

Gigi Sohn has a SECOND apparent corrupt deal with broadcasters.

In May 2020, Sohn joined the Board of Locast, a company formed for the purpose of streaming stolen, bootleg sports content over the Internet.  Locast would then charge its users $5 a month to view the pirated content without interruption – a bargain only possible when the content you're selling was stolen.  Sohn was one of the three key principals of the organization, serving on its board of directors.  And she knew exactly what she was doing – she joined the organization after broadcasters had sued Locast for violating the Copyright Act.

Not surprisingly, in August of last year, Judge Louis Stanton of the U.S. District Court for the Southern District of New York ruled in favor of the broadcasters.  Judge Stanton later signed an order that awarded the plaintiffs $32 million in damages.

One day after President Biden nominated Sohn to fill the decisive seat on the FCC, Sohn executed a settlement agreement that slashed the companies liability 98 percent, from $32 million to just $700,000.  A sweetheart deal for the broadcasters' new would-be regulator. And as the Wall Street Journal editorial board put it, “Interesting timing.”

But a side deal may have been even more corrupt.  On November 29, the National Association of Broadcasters (NAB) issued a statement saying: “Although NAB does not currently oppose the nomination of Gigi Sohn, we have serious concerns.”  They also said: “NAB is confident that these concerns can be resolved.”

In other words, come on back our new friend we just gifted $31 million in liability relief – let's make another deal.  Sohn knew opposition from NAB could sink her nomination, as moderate Democrats like Senator Jacky Rosen had expressed concerns about Sohn’s views on media issues.

On January 27, Sohn agreed voluntarily to recuse—meaning, not to regulate— retransmission consent, which is a key revenue stream for the broadcast sector.  Then, around 6:30PM that same day, so just two hours later, NAB put out...